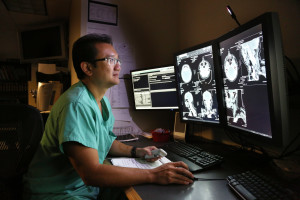 Angioplasty with or without vascular stenting is a minimally invasive procedure performed to improve blood flow in the body’s arteries and veins.

In an angioplasty procedure, imaging techniques are used to guide a balloon-tipped catheter, a long, thin plastic tube, into an artery or vein and advance it to where the vessel is narrow or blocked. The balloon is then inflated to open the vessel, deflated and removed.

During angioplasty, a small wire mesh tube called a stent may be permanently placed in the newly opened artery or vein to help it remain open. There are two types of stents: bare stents (wire mesh) and covered stents (also commonly called stent grafts).

Image-guided, minimally invasive procedures such as angioplasty and vascular stenting should only be performed by a specially trained interventional radiologist in an interventional radiology suite or occasionally in the operating room. This procedure is often done on an outpatient basis. However, some patients may require admission following the procedure. Please consult with your physician as to whether or not you will be admitted.

You will be positioned on the examining table. You may be connected to monitors that track your heart rate, blood pressure and pulse during the procedure. A nurse or technologist will insert an intravenous (IV) line into a vein in your hand or arm so that sedative medication can be given intravenously. Moderate sedation may be used. As an alternative, you may receive general anesthesia. The area of your body where the catheter is to be inserted will be shaved, sterilized and covered with a surgical drape.  Your physician will numb the area with a local anesthetic.  A very small nick is made in the skin at the site. A sheath is first inserted into the artery, or vein, if the narrowed blood vessel is a vein. Guided by x-rays, the catheter is then inserted through the skin and maneuvered through the artery until it reaches the site of the blockage. Once the catheter is in place, contrast material will be injected into the artery and an angiogram will be taken of the blocked artery to help identify the site of the blockage.

With x-ray guidance, a guide wire will then be moved to the site, followed by the balloon-tipped catheter. Once it reaches the blockage, the balloon will be inflated for a short period of time. The same site may be repeatedly treated or the balloon may be moved to other sites. Additional x-rays will be taken to determine how much the blood flow has improved. When your physician is satisfied that the artery has been opened enough, the balloon catheter, the guide wire and catheter will be removed.

Many angioplasty procedures also include the placement of a stent, a small, flexible tube made of plastic or wire mesh to support the damaged artery walls. Stents can be self-expandable (opens up itself upon deployment) or balloon expandable (balloon needed to open the stent). Balloon expandable stents are typically placed over a balloon-tipped catheter so that when the balloon is expanded, it pushes the stent in place against the artery wall. When the balloon is deflated and removed, the stent remains permanently in place, acting like a scaffold for the artery. Self-expandable stents are easy to deploy, but may require additional angioplasty with balloon to obtain satisfactory dilation (opening) of the diseased vessel. Covered stents or stent-grafts have additional advantages over bare stents and are becoming more commonly used.

At the end of the procedure, the catheter will be removed and pressure will be applied to stop any bleeding. The opening in the skin is then covered with a dressing. No sutures are needed. You may need to lie in bed with your legs straight for several hours. In some cases, your physician may use a device that seals the small hole in the artery, called a “closure device”, which will allow you to move around more quickly. When the procedure is completed, you will be moved to a recovery room or to a hospital room. Your intravenous line will be removed. The length of the procedure varies depending on the time spent evaluating the vascular system prior to any therapy, as well as the complexity of the treatment.

You should report to your doctor all medications that you are taking, including herbal supplements, and if you have any allergies, especially to local anesthetic medications, general anesthesia or to contrast materials containing iodine (sometimes referred to as “dye” or “x-ray dye”). Your physician may advise you to stop taking aspirin, nonsteroidal anti-inflammatory drugs (NSAIDs) or blood thinners for a specified period of time before your procedure. Also inform your doctor about recent illnesses or other medical conditions. Women should always inform their physician and x-ray technologist if there is any possibility that they are pregnant. Many imaging tests are not performed during pregnancy so as not to expose the fetus to radiation. If an x-ray is necessary, precautions will be taken to minimize radiation exposure to the baby.